The prices for the ranches vary as shown below:
The Ritchie Ranch is $10 per person entrance fee, and $1 per lb. for the agate and quartz crystals you take with you.  I’ve found a new agate piece at the top of the hill where my “big rock” came from, and I have no idea how big it is.  If you want it, you just have to dig it out and pay for it!  Payment can be by cash or check.

In order to get on the list for this trip, you need to send a deposit of at least half of the fee.  Of course, if you send the whole fee by March 15, you get an extra day of rockhunting for free!  We need 20 paid attendees for this trip to happen.  The check should be made out to Bryan Crumpton, and you can send it to me at:
Teri Smith
509 N. 8th Street
Alpine, TX  79830

South Larremore Ranch is about 45 miles south of Alpine on Highway 118.  It’s 2,500 acres that was once part of Rex Ivey’s ranch, which is now subdivided and called East Rim Ranch.   The ranch is flat, and consists of alluvial deposits containing many types of quartz stones.  I have wandered around on this ranch for three days, and have found agate, including moss agates, fortification agates, and plume agates; petrified wood, some of which is completely agatized in beautiful colors; jasper in all colors of red from orange to purple, along with yellow, orange, and green;  and flint and/or chert in nodules of different colors.  There are also some shell fossils, and some interesting things I call “Terlingua Nodules” that appear to be at least partly agatized on the outside, and often are filled with calciferous mud on the inside.  The cost for this ranch will be $40 per person.

East Needle Peak is $40 per person per day.  On my last trip down there, a couple of months ago, I found a 16 lb. chunk of green moss with pompoms in it, and a 5 lb chunk of clear petrified wood with yellow and orange inclusions.  The only reason I could identify it as wood is because the exterior of the piece showed the rings and bark of the original wood.

The Singleton Ranch is $50 per person per day, cash only.  More details can be found on my website.

All of my field trips require that you join the Rollin’ Rock Club.  The fee for that is $10 single or $16 dual membership for the calendar year 2015.

To summarize:  I need at least half your fee for the Walker Ranch hunts to secure your place.  And I will need 20 participants to ensure that the hunts occur (we’ve never had a problem with getting 20 people!)  If you want to get an extra “free” day, send your entire fee to me by March 15.

You don’t need to send me a deposit on the other ranches.  Simply send me an email telling me which days/ranches you wish to hunt on, and I’ll put you on the list.

All hunts begin at the Antelope Lodge, 2310 W. Highway 90, Alpine.  Specifics about each hunt’s starting time will be sent in an email in about a week or so.

All the ranches I lead field trips on have a good quantity of agate on the ground. This occurs because the basalt, where the agate grows, erodes, but the agates don’t, so they’re left in the dirt. Generally, all you need to do is pick them up. The more difficult ones may require you to dig in the soft dirt.

My basic equipment list is this: a table knife, like the ones you can get at a dollar store or thrift store. Stainless steel, all one piece. You use this to dig in the dirt around an agate and pop it out. Next, a chopstick. Use this to clean dirt off of an agate or clean out the inside of a geode so you don’t damage the crystals or mark the agate surface with a metal implement. Third, a toothbrush. This goes with the fourth item, which is a spray bottle filled with water. Use these two together to clean agates to see if they’re what you want. And wetting down an agate helps you see what it will look like polished. Another useful item is flagging tape, which can be used to mark the location where you put your lunch, your bag, or your car, and to mark the location of a rock you want to go back to later.

For putting your finds in, I like the bags we used to get when we went to conferences: canvas, with a couple of fairly long handles so they’ll sit on your shoulder. You can find these at thrift stores, garage sales, and perhaps in your own closet. When the bag gets full and you bring it back to the car, you can empty it into a bucket and start over. That way you don’t have to carry many rocks at a time.

Of course, you want to have a rock pick, a crack hammer or small sledge, and a couple of prybars in your car in case you find the one in a thousand agate that’s still in the basalt. But you don’t need to carry them with you all the time. You can buy some construction flagging tape and take a piece with you as you hunt. Then you can mark where the great rock is that you need to get out of the host rock, and go back to your car for the tools.

Now, I’m spoiled, and I carry something called a gem scoop or treasure scoop. this gadget helps you by allowing you to lift rocks up off the ground without having to bend over. I should have some in my shop to sell by April, or you can get them from Kingsley North at this url: http://www.kingsleynorth.com/skshop/products.php?keys=treasure%20scoop&catID= 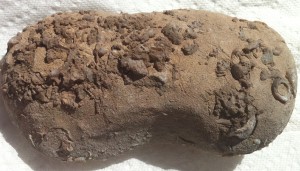 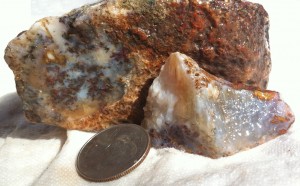 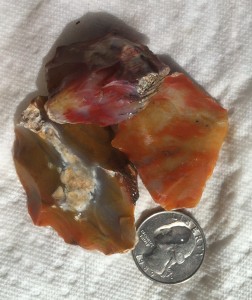 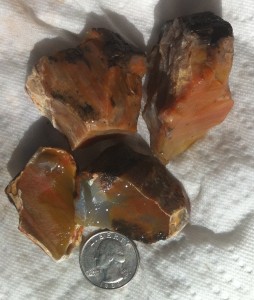