This is the last page of a set of press releases I sent to local newspapers with a copy of the Rock & Gem magazine for September. The purpose is to let Big Bend area residents know that rockhunting is a viable tourist attraction in the Big Bend Region.

Using mostly rocks found on her field trips, Teri Smith has created the Last Frontier Museum to show rockhunters and others what collectible and valuable rocks and gems can be found in the Big Bend Region.

The museum fills a room in the office of the Antelope Lodge. Except for the contents of a display of “Agate from Other Locations”, most of the items in the museum were found by Teri during her years of rockhunting in the Big Bend.

According to Teri, the museum could be much larger if she had the room. “There are many wonderful examples of agate and other minerals that I simply don’t have space for right now”, says Teri.

But the museum is quite crowded as it is, with exhibits covering the different types of agate found in the Big Bend, the colors and forms of quartz crystals found here, the different ways agate can look when you find it, and examples of what you can do with the agate you’ve found. There’s also an exhibit comparing what can be found on each of the ranches where Teri leads rockhunts.

Fossils, too, have a place in the museum. They can be found in profusion in the area near Terlingua, and also as far up in elevation as Alpine and its environs. 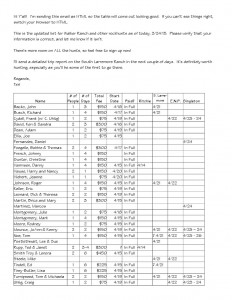 We have 16 signed up f or all 3 days, deposit received from 7 people so far.

And there are 4 signed up for just one day, deposit received for all 4.

East Needle Peak hunts will be Wednesday, 4/17 and Thursday, 4/18.  Cost is $40 per person.  Let me know in advance if you’re interested in going.  The group will meet at the Antelope Lodge at 7 a.m. each day.

The reason I need to know in advance for the hunts is twofold:  If no one is interested, we’ll cancel the hunt, and if I don’t know you’re coming, I won’t wait for you if you’re a bit late.

Remember that Rollin’ Rock Club membership is required for all these hunts.  Or you can be a member of an SCFMS club that considers my rockhunts “Official” hunts for their club.

For those of you who would like to go to the Walker Ranch, here are the conditions under which we can get a 3-day field trip this spring: we’ll need to have a minimum of 20 people who have paid their deposits, and about 2 weeks notice for the owner to be able to come out here and run it. The price is still the same: $75 per person per day, or $150 per person for all 3 days. Those of you who have been here know that this ranch is certainly worth the price of admission. And there hasn’t been a hunt on this ranch for at least a year, but there have been a couple of good rains, so there ought to be lots of material visible on the surface.

The Alpine Agate Festival is the 3rd weekend in April (19th – 21st), so that is the weekend we’re looking at. Please email me back if you’re interested, at agatehunter@sbcglobal.net (or reply to this email), and let me know how many people will be in your group. We’d love to have clubs come out at that time! I believe that people will be able to dry camp on the ranch if they wish, at no cost. Let me know if you wish to do this, and I’ll verify it before you send in a deposit.

Your reservation won’t be confirmed until you send a deposit of half the cost of the rockhunt. I’ll send you the detail about the deposit once you tell me you are coming.

Before and after the Walker trips I can host trips to the Ritchie Ranch and East Needle Peak. Both of these places have yielded fantastic things recently: at the Ritchie Ranch, a rock was found that had two very different geodes in it: one was a fantastic yellow and pink fortification piece with pinkish quartz crystals in it, and the other was a bare cavity with a few dozen individual quartz crystals in it. These two geodes had formed in the same rock, only about 2” from each other, yet one was very rich in quartz while the other was almost barren! I’ve got no idea which one formed first or how they managed to be so different, but it will surely make an incredible display.

As for East Needle Peak, Cindy Fryar discovered a spot where there are ammonites! They are generally broken, and yellow ochre in color. They are of the type with the curvy suture lines between the segments. The biggest piece to come out of there is about 80 percent complete and the size of a dinner plate! Now that I know there are some down there, I’m going to recheck every place that I’ve found fossils to see if I’ve missed something else!

Cost for East Needle Peak is $40 per day per person, and the Ritchie is $5 per person entrance fee and $1 per lb. of good agate.As with all my field trips, Rollin’ Rock Club membership is required unless you belong to a club that has declared that my field trips are official trips for your club (so that the SCFMS insurance applies).

Hope to hear from a bunch of you soon.